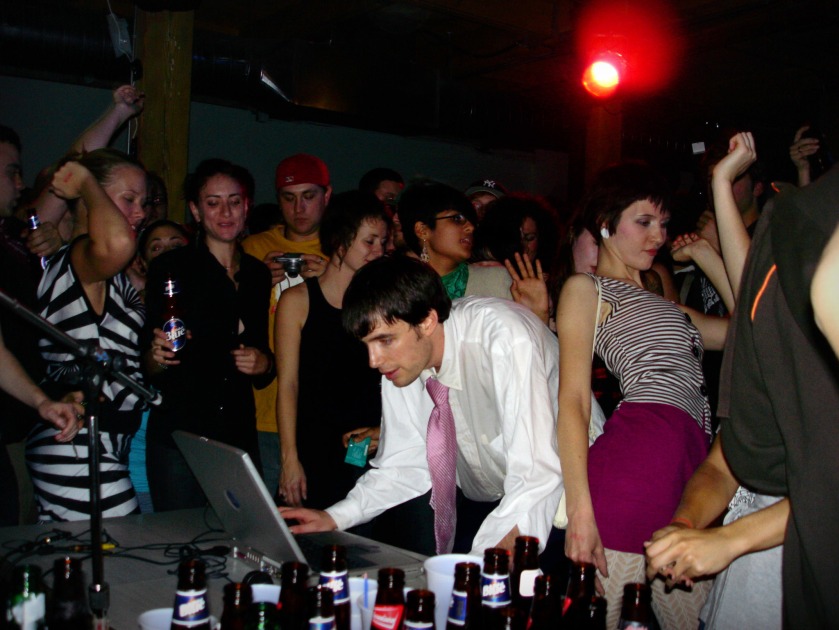 DJing is dying.  And laptops are killing it softly.  I’m a laptop DJ.  But, I respect the art.  I was introduced to the game by a real vinyl DJ from Harlem named DJ G.LO.R.Y.  He literally carried crates of vinyls to his gigs and DJ’d on turntables with no laptop or Serato box, which is unheard of these days.  He schooled me on how to DJ with real vinyl, so I can get down on some turntables without a laptop.  I haven’t mastered them, but I have the basic skills on vinyl, i.e. beat matching, basic scratching, etc, which are much more difficult without a laptop.

The problem is most of these DJs today have never even dropped a needle on a real vinyl record, let alone DJ’d a set with them.  Why does that matter?  It’s about respect.  We say “Respect the DJ” for a reason.  DJing is an art form that is getting lost.  And, parties are suffering for it.  Nowadays, because of technology, DJing is much easier.  People can learn to DJ on laptops and controllers, download a bunch of mp3s and call themselves DJs, when they can’t even beat match, can’t do anything resembling decent scratching and their transitions are horrible. Add to that the fact that a lot of these DJs can’t read crowds or even select songs well and you have a recipe for disaster. A lot of these guys shouldn’t be DJing.

Since DJing is so easy now, the market has been flooded with laptop DJs.  They all want to look cool and get chicks.  And, they think DJing will be easy money.  That’s why they sign up.  And, I don’t blame them for that.  We all want that.  But, when respect for the art of DJing is lost on these newbies we all suffer.

Let me give you a scenario.  Some guy gets it in his mind that he’s going to be a hot club DJ and get all the chicks.  So, he buys a laptop, a controller and downloads a bunch of mp3s.  He spends a week practicing then he thinks he’s ready for the big time.  So, he hits up his cousin, brother or whoever, who happens to be the promoter for a big party and the promoter pays him $50 to DJ or some chicken scratch like that, which is ridiculously low and undercuts professional DJs.  So, he shows up to the gig wearing some fly gear he spent more time picking out then he did practicing and he plays the top 20 hit songs on repeat all night and people claim they had a good time, but here’s the secret: they really didn’t.  People are starting to complain about the quality of DJing at parties.

Since the DJ market is so saturated, the balance of power with promoters is out of whack.  Fewer of promoters desire quality DJing and more of them require that DJs bring clientele who buy bottles and tables or bring a big crowd, in essence, asking the DJ to do their job for them.  What happened to paying a DJ to DJ a party well, set the ambiance and make everyone have a good time?  And, what happened to promoters doing what their name says and promoting parties and bringing out crowds?

I take DJing very seriously.  And, honestly, I’m very good at what I do.  Ain’t no party like a Boss Player party, trust me.  People actually dance at my parties, which seems to be happening less and less at other people’s parties I observe, for the most part, as time goes on.  There are real DJs out there.  You’ll know it when you encounter one.  You won’t be able to stop dancing and you’ll wonder why you can’t stop buying drinks at the party.  But, we are a rare breed.  We are few and far between.  When these new laptop DJs disrespect the game and get booked for these clubs without practicing and when they don’t have good mentors like I did (DJ G.L.O.R.Y., DJ Money and DJ Analyze), it shows.  And, as a result, all of our party lives are suffering.  People aren’t having a good time like they used to when they party and people aren’t going out as much, which equals less fun and less money for all of us.

So, in short, there is one solution to this problem I’ve presented to you so we can all win:

A lover of music and all people... View all posts by DJ Boss Player